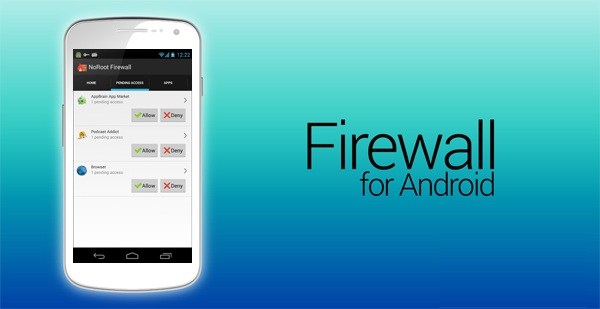 A firewall app on your Android device translates to efficient data usage and less time complicating your life using the method. Sometimes you have so many apps on your Android, and you’re strapped for time. If you are free, yes you could access ‘Settings’ and just go to Data Usage to select ‘Restrict App Background Data.’ However, if you run the app, it will use internet data. There’s also the problem of not being able to select apps individually or view network traffic and data usage statistics. This is where firewall apps shine.

Plus, you also get additional features which your Android device won’t provide when you use these apps. Don’t believe us? Just try them out and be ready to be mindblown. Some are free, some are premium, and we’ve included something for all types of users and preferences.

Here is a list of the best firewall apps for android geared towards users of both rooted and unrooted devices.

If you’re looking for a free firewall for Android that doesn’t compromise user experience, NoRoot Firewall is your answer. We like NoRoot Firewall because it lets you block access to internet and mobile data by allowing you to shortlist your apps. There are additional features like being able to block specific websites and IP Address. The bad news is that it doesn’t work for IPv6 addresses (yet) which means it could not work on LTE connections. New users also report the user interface to be a bit on the overwhelming side since the app is docked with filters and features.

Our verdict – For what it offers for free, it’s worth to learn and use it. Oh, and did we mention that it’s geared for unrooted Android devices?

NetGuard is next on our list of the best firewall apps for your Android. Just like NoRoot Firewall, it lets you block network access to all your apps or just the ones you pick. There are features like app blacklisting and whitelisting but what stands out the most is its clean user interface. The bonus is you can also block specific IP addresses to particular apps, log your internet access, and even filter IP packets on the go. And the best part? It’s free and open-source.

Our verdict – Although it’s free, it does come with adds. You’ll have to access advanced features by making unlocking via in-app purchases.

For you rooted Android users out there, AFWall+ is your ultimate data safety net. It lets you customize user profiles, export rules, tweaks preferences, hide/display apps, and has a ton more features that will make you want to download it.

Our verdict – If you’re thinking of rooting your device or already have and want firewall protection for Android, get this, hands-down.

MobiWol: NoRoot Firewall is extremely easy to use and has an intuitive UI that makes you want to keep it for the visuals. The biggest reason to get it is that it lets you define when you want to block apps by setting data usage limits. It enables youto prevent your internet connection, WiFi access and has options for enabling and disabling your selected apps with foreground and background modes. You can set the firewall rules and settings, view your connection logs and view data usage statistics too.

Our verdict – It’s a simple, no-nonsense firewall app for Android users. It’s open-source, lets you block system and newly installed apps, and is a no root firewall app. The bad news is it runs ads since it’s free.

NoRoot Firewall Beta features a super clean UI and lets you know if any of your apps try to access the internet, by default. It lets you view statistics related to what apps are doing in your device, which websites they are visiting, and how much data they’re consuming. Just like with our other firewall apps on this list, it lets you block internet access and WiFi access for all, selected, and individual apps.

You can enable password protection feature on the app to prevent other users from accessing it it has an option not to load images when you visit websites to save on data usage. You can also capture data packets, play with the bandwidth, block selected and individual IP Addresses, and log network interactions with apps.

Our verdict – It’s free, open-source, and runs no adds. We recommend it to Android users looking for a firewall app for their unrooted devices.

The LostNetNoRoot firewall app packs a wallop and is easy to use. You can block access to the internet by selection or choose all apps and prevent them from accessing WiFi and/or mobile data. The best part it lets you restrict your apps from accessing specific countries and regions. It even enables you to block ads when visiting websites and prevent any malicious domains or sites accessing your device.

And here’s the fun part- you can block apps while you sleep. Yes, you read this right.

You can set timings and schedules for enabling/disabling app accesses to networks. There are additional features like being able to monitor network traffic, capture data packets, multiple user profiles support, instant notifications, and blocking unidentified and unsafe networks automatically.

Our verdict – You don’t need to root your device for it to work. It’s reasonably priced at 0.80$,and if you want a premium firewall app, this is it.

NetPatch Firewall stands out from the rest of firewall apps since it lets you block specific apps when your screen is turned off. It allows you to create custom domains and IP address, block particular websites, and as always, block individual or a collection of user-selected apps.

It also lets you create yourown rule settings and claims to be the only app that runs on the Shadowsocks and ShadowsocksR secure proxy. The app is free for all,and it features exclusive in-app purchases too.

Our verdict – If you’re looking for a firewall app that blocks traffic when the screen is off, get this without any hesitation.

Karma Firewall is one of the best Android firewall apps for beginners. The UI is simplistic in design making it a breeze for users to navigate and use the app without getting bogged down by features. It lets you block app accesses to the internet but has no options for preventing apps based on WiFi or mobile data. Either you allow the app to connects to the internet,or you don’t. The app doesn’t require users to root,and it also requires very few permissions.

Our verdict – It’s a fully configurable app and is one of the most trusted apps in Google Play Store since it’s known to protect sensitive data and block unwanted traffic.

Ultra Firewall is an app that requires root access to work. It autostarts on booting when you give it permission and blocks apps that connect to the internet via WiFi or mobile data. The UI is very user-friendly however the downside is that it does not work with 4G LTE networks.

The app even blocks ads from offline games. However, it does display ads. It also lets you sort the blocked apps by using filters for the name and UID.

Our verdict – It’s clean UI simple approach to blocking internet traffic makes it one of our favorites. Since it’s designed for rooted users and is free, it’s worth checking out.

Internet guard Data Saver Firewall Pro is a premium firewall app that lets you set to allow/block access on an app-by-app basis. It logs outgoing traffic, features light and dark material design themes, and automatically starts up on device launches. There are network speed graphs,and it doesn’t require root access.

Our Verdict – it’s a rare app that uses the device’s VPN to create a firewall and protect sensitive information. It supports Android 5.1 and later and also features IPv4/IPv6 TCP/UDP and tethering support. The only catch is it isn’t free the price is worth it.

Although Android devices feature a firewall by default, it doesn’t let you customize what you allow or block access to. These apps give you the creative and technological freedom to prevent unwanted network traffic, get insights to the data that is being sent and received in the background, and finally, are free (most of them). We understand everybody likes free stuff, but the excellent ones we mentioned are value for money too. Give these a shot and let us know how it goes. We’re sure you won’t be left disappointed.